Welcome to the very first Food Love Fridays post, everyone!

Let’s kick it off right.  Together now …

I’ve been a fan of America’s Test Kitchen (ATK) for years.

They were people after my own heart: people obsessed with making great (even lackluster) recipes better, toiling away in their test kitchens so we wouldn’t have to.

My kind of people.

So you can imagine my pleasure when they contacted me out of the blue to ask if I’d be interested in reviewing one of their new cookbooks on Small Kitchen Chronicles.  Needless to say, the answer was a delighted “yes.”

So they sent me four of their most recently published cookbooks and though each were all very solid — in their own ATK kind of way — after much pondering, I decided on this one.

Ladies and Gentlemen, I give you the America’s Test Kitchen D.I.Y. Cookbook. 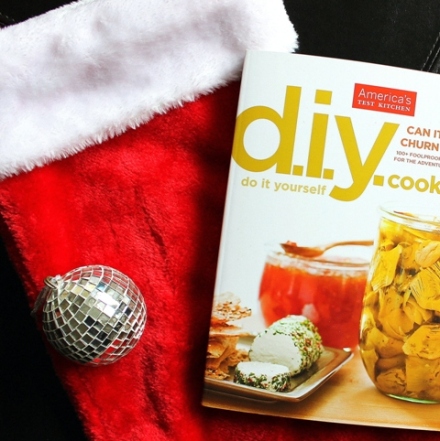 Now, I know what some of you are thinking.  Do-it-yourself, Christina?  Really?  And to that I say, “Yes!”

Now before you tell me that you don’t do that sort of thing, I will ever-so-lovingly differ with you ’cause I do not beg.

I used to think the same thing myself until I realized that we actually do-it-ourselves every time we make a recipe.  Every time we choose to fire up the oven or stir that pot.  And even when we hit a few buttons and press “Start” on the microwave we are in fact, doing it ourselves.

This cookbook sets out to help you not only do-it-yourself better, but so much more than you ever thought you could.

Chock-full of fascinating ideas from the ordinary to the unexpected, it really is all in there — from your typical jams and jellies to making your very own, very atypical duck prosciutto.  (Duck prosciutto!)

Pickling, curing, fermenting, granola, different kinds of cheeses, butter, spirits — that’s just for starters — and even bacon jam … bacon too.  All laid out for you in a simple-to-follow-way, with plenty of helpful pictures and a “Why This Recipe Works” introduction by the editor who created the recipe.  Awesome! 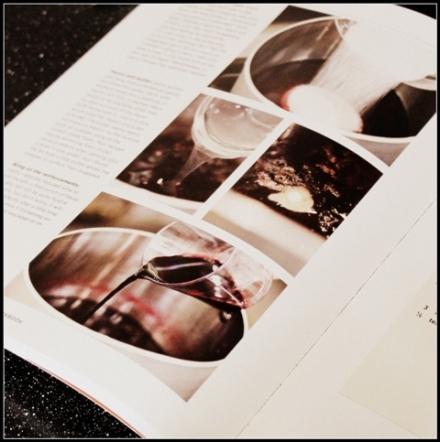 So, armed with an arsenal of instruction and high hopes, I bravely set out to do-it-myself and recipe-tested this cookbook for you, so you wouldn’t have to … and to answer the burning question:

Do the recipes actually measure up?

I made the wine jelly, to be served atop all sorts of tasty cheeses (and which is setting in the fridge as we speak) …

… and the granola, which I found had to be baked ten minutes less than the time instructed (as it was getting too brown) but …

… after the dust had settled and the granola cooled … even with the minor necessary adjustments … the verdict?

So delish in fact that I had to put my poor husband on granola ration for fear there wouldn’t be any left to shoot the next day.  True fact.

So is this cookbook worth it?  Uh and huh.  ‘Cause it does much in proving that homemade is not only better but about as old-school awesome as it can get.

Will you be able to make most of its recipes in 20 minutes or less?  No.  But to that, I give you a great quote by John Wooden who said it perfectly: “Good things take time, as they should.”

And to that I add that the best part of life is the journey … and in smelling the flowers along the way.

So let yourself do that.

And next time you find yourself in the frozen food aisle or grocery store contemplating the options, do yourself a favor and — every once in a while — do-it-yourself.

With this cookbook by America’s Test Kitchen, now you can.