I know it’s been a little quiet ’round these parts lately.

So quiet in fact that if Small Kitchen Chronicles where a chicken, it would be a Brahma.

(Sorry about the obscure reference, everyone, the chicken obsession continues).

You see, with Brahmas, still waters run deep.  They’re known as giant, lumbering, Zen-like chickens who quietly putter around the yard while the rest of the flock buzzes busily on around them.

Now I’m not saying I’ve achieved Buddhist-like Zen-dom, packed on the feathers and gone off and joined a monastery, but like my good buddy the Brahma, I’ve slowed down a bit.  Okay, a lot.

It has been a real choice and it has not been easy.

Keeping with the chicken references, you could say I’ve been more like a Rhode Island Red hen most of my life.

Image from Flickr.Com — Some rights reserved by terriem

I.E. Not arguably descendant from the Tyrannosaurus rex, but a super producer, super productive and go-go-go.  All.  The.  Time.

This Rhode Island Red-ness has served me well, allowed me to achieve much and produce a lot. 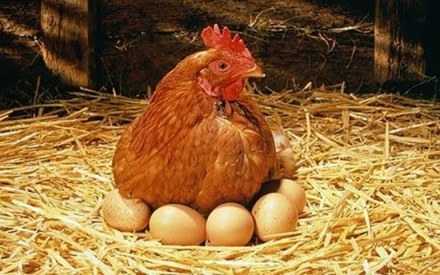 But what it’s also done is feed the belief that “I am what I produce” and left this lingering, omnipresent question of “who am I and what value do I have if I don’t?” hanging over my head like an ominous storm cloud of mythical proportions.

It hasn’t helped with enjoying life itself all that much either.

So I’ve scaled back, way back and done like a Brahma chicken.

I’ve stopped obsessively checking my stats.  Stopped spending so much time online and on the computer.  Questioned my reasons for posting and if guilt or feeling like I should or have to have anything to do with it, I go off and do something totally unproductive instead.

The Rhode Island Red hen in me has been having an aneurysm, but it’s been good.

And as hard as it has been, I am learning to define myself and my value as a person these days not by what I do, but by who I am.

And like a Brahma hen, that means just being me.

And slowly learning that that is, and has always been, enough.

Forget the shoulds.  Want the best grilled cheese sandwich you’ve ever had?  All crispy, buttery perfection on the outside and gooey, cheesy heavenly-ness on the inside?  It’s all in the technique.  Do like a Brahma chicken and don’t rush making these and you’ll be very glad you did.

In a large skillet over medium heat, melt enough butter — about half the butter and a scant drizzle of olive oil — to coat bottom of skillet.  Swirl to coat bottom evenly.

Note:  Adding a scant drizzle of olive oil will prevent butter from burning.

Arrange prepared sandwiches side by side in skillet and — pressing down firmly on both sandwiches with your fingers — spin clockwise and counterclockwise until all melted butter in skillet has been evenly absorbed by both.

Cover sandwiches with a dinner plate — top side up — and press down firmly.  Cook for 3-5 minutes on one side, until golden brown.

Note:  Dinner plate acts like a press and is key to making an awesome grilled cheese sandwich, so don’t skip this step!

Using a kitchen towel from here on out — ’cause plate will be hot! — careful remove dinner plate and set aside.  Using a spatula, transfer half-browned sandwiches to plate.

Add remaining butter and a scant drizzle of olive oil to skillet and swirl to coat bottom evenly again.

Transfer sandwiches back to skillet — browned sides up — and again, pressing down firmly on both with your fingers, spin clockwise and counterclockwise until all melted butter in skillet has been evenly absorbed by both.

Cover sandwiches with dinner plate again — top side up again — and press down firmly.  Cook for 3-5 minutes on other side, until golden brown.